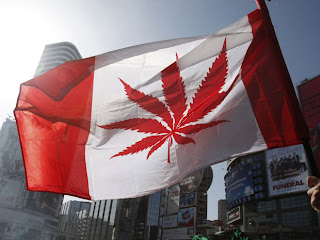 Americans and Canadians like to think they are two separate peoples and cultures, divided by our respective roots, histories, and the 49th parallel. But when it comes to marijuana policy, the differences start to become fuzzy. The decades long "war on drugs" has wearied citizens on both sides of the border and the tides are turning.

With economics like we've seen lately, many are wondering why governments are spending such valuable resources on petty marijuana "crimes". Canada spends almost half a billion dollars a year on drug enforcement, while the United States spent a whopping 30 times that in 2010!

The good news is that people just aren't standing for it any more. It seems every week a new poll on legalizing marijuana is released and the numbers don't lie. Near three quarters of Americans are on board with reclassifying the popular drug or decriminalizing it altogether. A new Forum Research poll reported in the Vancouver Sun shows roughly 65% of Canadians feel the same way.

With more and more research emerging, and more diseases and ailments than ever being treated with THC it's no wonder medical cannabis is widely accepted across age groups.
Email ThisBlogThis!Share to TwitterShare to FacebookShare to Pinterest