What’ll It Take to Finally Legalize Marijuana in the US? Think Green! 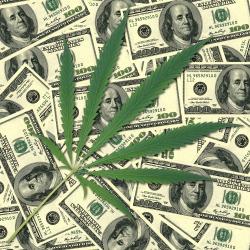 By green, we don’t mean weed green, and we certainly aren't talking about anything eco-friendly. We mean green as in moolah, cashola and payouts. Just like anything else, when Big Money gets involved, things happen. Think we’re crazy? Here are four reasons we’re not:

1. Tax Revenue is Down
This is an old argument, but politicians are finally listening. With tax dollars hitting record lows and dropping every year, states are looking at every possible source of revenue to keep their bureaucracies funded and their red-tape rolling.

Take Virginia, for example. This ultra-conservative state has barely given MMJ a thought, but Delegate David Englin introduced a bill to fund a study to see how much revenue the state could raise by legalizing pot and selling it in state-operated ABC stores. With no mention of prescription requirements, locals were left wondering if this would be purely recreational – a definite one-off from most other proposals. The bill never left the table, bit it’s a clear sign of change.

2. You Can Buy Stock In Pot
Next time you’re checking out the stock market, take a look at Cannabis Science trading as CBIS on the NYSE. This is a legitimate biotech company that is leading the way in pharmaceutical-grade cannabis products. As of February 14, 2012, this company spent a small fortune to acquire several other companies and licenses.

Why the big move? They appear to be trying to corner the market on not only prescription-based products, but OTC medications as well. Just imagine being able to walk into your corner drug store and buy THC or CBD like it was baby aspirin. Cannabis Science is also working on:

3. Big Tobacco is in the Game
Conspiracy theorists have been saying that Philip Morris has been researching marijuana cultivation in preparation for legalization since the 70s – and they’re probably right. However, even the naysayers can’t ignore the black-and-white truth of California’s property records. This tobacco giant has been buying up massive amounts of acreage throughout the Sunshine State, the most famous region in the war for legalized MMJ.

4. Even the European Companies Are Interested
Everyone is watching to see how the whole legalization thing plays out, including European companies. UK-based Rhino Seeds has just implemented an international shipping program putting the good old Stars and Stripes on their check-out page right beside the Union Jack.

Serving the cannabis-seed needs of UK stoners for over 10 years, this trustworthy company is crossing the pond to fill in for the lack of a reliable US-based source. If you’re legal to grow, this is a great place to get started. Choose from over 50 breeders, more than 4,000 strains, full automatics, feminized seeds, cheeses, diesels, blueberries, kush, Sativa, Indica and medicinal strains. If they don’t have it, it probably doesn't exist! Or, they’ll work their ass off to get it for you if you ask.

Even though they look big, this is a relatively small operation with hands-on customer service. If you have a question, just ask. A real person will make sure you get an answer you’re satisfied with. The only catch is they’re just starting on their international gig. Until they get the credit card details worked out, you have to send cash. On the bright side, you’ll get fresh, top-shelf cannabis seeds backed by an unmatched quality guarantee.

So what do you think? Will greenbacks do what millions of cancer patients and their doctors couldn’t?
Email ThisBlogThis!Share to TwitterShare to FacebookShare to Pinterest