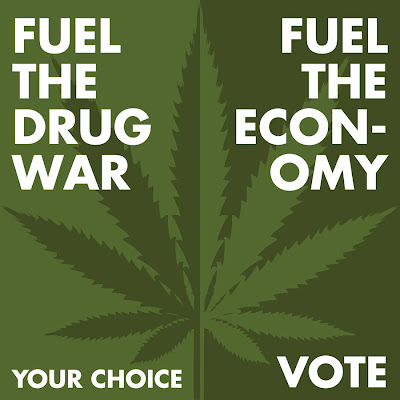 Here's David Brannon's most recent editorial contribution for Baked Life. The photo on the left is from OneGrandBad's controversial flickr photostream.

While supposedly unarmed [it’s an easy prefix to lose, yes?] military drones patrol the
sky above the U.S. / Mexican border, below them rages a shooting war over turf and profits from on of those same drugs impact the violence?

The street cost of illegal drugs is, in part, a function of how much money it takes to
convince someone to run the risks associated with violating the law. Actual cost of the item + a
premium for the risk = retail cost. That premium can result in obscene profits. Those profits
attract players whose only interest is the money; people who are willing to kill to protect a
lucrative sales territory. Prohibition adds a premium in either coin or courage. Legalization
would end the premium.

After legalization the cost of obtaining a currently illegal drug would reflect the true cost
of planting, tending, treating, processing, and transporting that item + a fair profit. The same
calculations that price a bag of apples would apply to a bag of weed. There would be some
reasonable profit. But, with the end of the prohibition-created-and-upheld-premium prices
should fall. As the money shrinks so might the gangster allure of the drug trade. It won’t be the
end of exceptional [read “expensive”] cannabis. There is a small market for top-drawer
anything. That won’t change. But as overall return on investment comes down, each drug trader
will ask themselves, “Is this return worth the effort?” When profits were a dollar per unit a
certain amount of effort and risk was justified. If that profit is now only one penny, well . . . . . .

Many of the people currently in the drug trade [ regardless of their commodity of choice ]
are there only to make lots of money. If, tomorrow, lots of money was made by running around
acting like a monkey, druggie-business-types would be running around acting like monkeys.
These folks are about the money.

With excessive profits no longer attracting only-here-for-the-money people any violence
related to the money might evaporate. That will leave only whatever violence is inherent in the
drugs themselves. As to cannabis, have you ever been to a pot-only party where there was any
violence? Neither have I.

With a living in the offing but probably not a fortune, who will become the face of
recreational drug production? Will your dealer also be your grower? Wouldn’t it be nice if your
delivery driver appreciated how important it is to handle those beautiful buds tenderly [at least
until you grind’em up and set fire to them]? Will you finally grow your own?