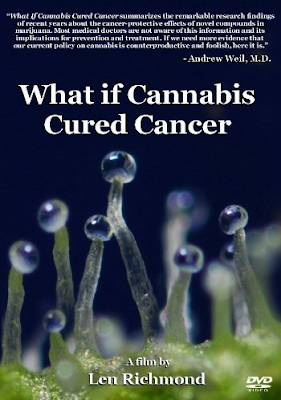 Len Richmond is the creator of a new film that aims to show that prohibition is anti-science. He sent BakedLife.com some of the press related to the release of the film, and so we are passing it on to you:
What if Cannabis Cured Cancer? Cannabis Culture presents an interview with Len Richmond, director of a new documentary film about how science is showing that compounds in cannabis attack cancer while protecting healthier cells.

It is one thing to kill a cancer cell, but the real question wracking science’s collective brain is: can you survive the treatment?

This is the central concern regarding how we approach cancer, the plague of modern times. Len Richmond’s documentary What if Cannabis Cured Cancer, narrated by Emmy award-winning actor Peter Coyote, is a well-researched account of the chemical benefits of the cannabis plant. Featuring interviews with a multitude of doctors and researchers across the world, the film explains how certain compounds in cannabis, including THC, attack only cancer cells while actually protecting healthier ones. And here is the real kicker: with incredible results! However, its healing effects are not limited to just cancer. Cannabis contains compounds that work holistically with the entire human body on such conditions as epilepsy, bipolar disorder, glaucoma, Alzheimer’s, multiple sclerosis, neuropathic pain, depression, leukemia, and more.

The documentary also outlines the misinformation campaign by both government and media as to the ill effects of cannabis on users. For instance, it is an eyebrow-raising revelation that not a single recorded death has ever been attributed to cannabis, while it remains a Schedule I drug – along with heroin and meth – under the Controlled Substances Act.

But it’s not just the plant that’s having a tough time in the world. Len Richmond has tried earnestly to get the medical community to be involved in the amazing amount of research he’s uncovered in his film:

“I contacted the John Wayne Cancer Institute,” he says. “To offer researchers a chance to look at my film. The PR guys said I had to write to the individual researchers. So, I got all their information, emailed them, and offered them a free copy of the documentary. There was not a single response. Weeks later, I sent a follow-up email, again offering a free copy of the film and asking, ‘Are you really so sure that you’re right that you’re not even open to entertaining an alternative point of view?’ Well, then I got a response: ‘Don’t you email us again! We’re not interested!’ It’s crazy! Chemo therapy is hurting people. It makes me angry. It’s a scandal, the way cancer is being treated in this country as a profit-driven industry.”

Despite having sporadic acceptance in the mainstream medical arena, Richmond’s film is gaining an enormous amount of success in the medical marijuana community. People are excited about the evidence contained in his documentary, and with good cause. What if Cannabis Cured Cancer creates a convincing argument on how and why marijuana should be seriously considered as a cancer-curing agent.

This film is creating a lot of waves and Baked Life has it's finger on the pulse so check back as we continue discusing this movie for the next few weeks.