I do have a friend that eats frozen waffles still frozen, but despite the title, these are toasted frozen waffles. I first came up with this ideas when I really wanted a PB&J sandwich but didn't have any bread, so I used two blueberry waffles instead. Yumm...

As you can see, with the help of a little bit of induced hunger and creativity, a simple quick fix can evolve into this: Marshmallow-Nutella-Banana-Bacon Waffle Sandwich
serves 3

Ingredients
1 box frozen waffles (any flavor)
1 banana
6-9 strips of bacon or fakin' bacon
Marshmallows (mini or maxi)
Nutella, about 1/4 of a jar


Directions
If you're going to use marshmallows, a toaster oven is almost essential, but an oven would work as well. 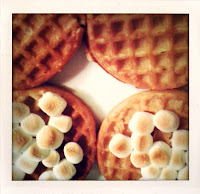 First, start cooking the bacon in a frying pan. Next, place 1-2 large marshmallows or 7-10 mini marshmallows on every other waffle. Place waffles, 2-4 at at time, in the toaster oven and toast until marshmallows turn a dark brown. Remove waffles from toaster oven and spread Nutella on the the waffles without marshmallows. Slice banana and place evenly on the the Nutella smeared waffles. When bacon is fully cooked, place 2-3 strips on top of the marshmallow sided waffle. Combine into a sandwich and prepare to have your mind blown.