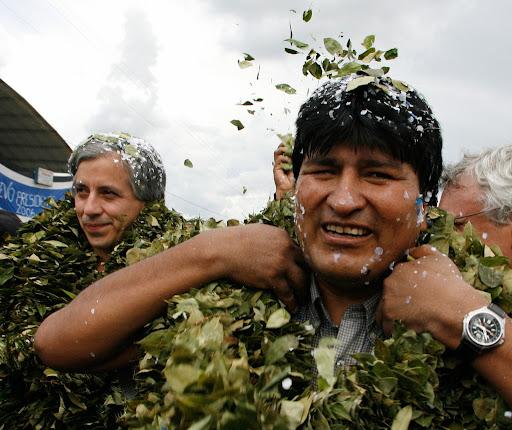 Bolivian President Evo Morales has had enough of the DEA presence in his country. So like high schoolers at a college after party, or college students at any party without a keg and jello pit, he's decided it's time for them to get the hell out.

Morales has stated that they seem to have no respect for their police or their armed forces. He's given the U.S. agency three months to pack up and get out. According to him Bolivia can take care of it's own drug problem, and will. He has recently spoken out rather harshly against the U.S. saying that they have had a hand in the violence and drug problem. Our government denies that there is even a hint of truth to his statements. Common sense however, dictates that given that there is no benefit to him in slandering the U.S. (except for street cred on the subversion underground), there must be some reason for his outrage.

The U.S. government and it's ambassador in Bolivia have been recorded saying that this is a grave mistake on Bolivia's Part. President Bush has even proposed that the country be denied their trade benefits until they resume cooperation.

Now here's my take. I think the U.S. government needs to stop trying to fix the world. Yes some of the actions of other countries will hurt us, but that does not give us the right to step in and take control. If my neighbor lets his grass die, effectively lowering my land value, can i force them to clean it up. Actually I think home owners associations occasionally do that, and that is a part of the problem.

We all want everything to be so neat and safe, so we try to standardize the world. We don't establish an institutionalized equality with nations until they give us the permission to clean them up, pass out some McDonald', and ship out their resources. We don't have the money or more importantly the right to keep doing this.
Email ThisBlogThis!Share to TwitterShare to FacebookShare to Pinterest